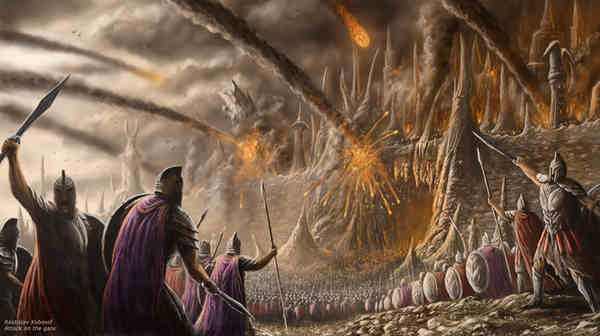 This is a short story I wrote in my literacy class.

Burmo slid pawns across the map.

“If we move now, we might just reach Mage Hedge before the goblom attack.”

“The goblom are known to end a fight before it even begins,” said Larin as she put herself in a comfortable chair, “they must have already set booby traps to ambush any reinforcements, if we’re too caught up in it, not just the people of Mage Hedge that are doomed, the people of this town would also be overran.”

Orlega paced to the edge of their tent. He wondered about the pawns. Without any resemblance of the ten of thousands of elves it represents, just a couple simple white cones.

Burmo, a dwarf general, clenched his fist, “they will siege tomorrow at noon.”

“Sooner,” said Larin, the scout commander, “If we’re lucky, we’ll have until dawn.”

An average goblom is not enormous. Slaying a small horde would be easy. But because of the telepathic connection that the whole horde shares with the leader, the more of them in a horde the better their attack coordination is.

Orlega halted his pace and turned his attention back to the map. A red cone larger than any other stands high in the corner of the map representing the queen and her guards along with the other ten smaller ones representing the rest of her horde.

“A single mistake would lead to the failure of this mission,” said Orlega as he toppled a white, plain cone symbolizing his army, “What do you suggest, Burmo?”

Burmo looked at Orlega straight into the eyes, “I’m afraid you’ll be against this, general, but we could lure them out. Let the front line commander march his soldiers through different routes and lure out the ambush. Our main force could then find a safe path.”

“Lure out the ambush?” asked Larin, “that’s a death sentence for the commander and his men, a squad this small would be slain before they even realize that there’s an ambush.”

Orlega stared at the map with his chin placed on his left palm. All he saw was the river leading to Mage Hedge.

Larin raised her eyebrow, “what do you see Orlega?”

“A very dangerous plan,” Orlega responded, “the queen attacks because she wants the ancient relic of Mage Hedge, we secrete our fiercest fighter inside the relic room and we will engage when our chance of victory is at its peak. With the queen’s death, the united horde would break and the goblom would seek different leaders and create their own different weaker packs.”

“Into the center of the horde?” said Larin, “that too is a death sentence.”

“But we give ourselves a chance of destroying the queen,” said Burmo.

“No plan comes without a risk,” said Orlega, “I will lead only those that are willing to join me. After the queen is slain, it would be a simple matter to trap and finish the rest.”

Orlega slid the white cone along the river until it completely overlaps Mage Hedge, then moved the red tall one right after. The queen stood dead center of Mage Hedge. With a flick of his talons, the red tall piece toppled over. That done, he slid two more white cones to join the fight.

“This is the plan.” exclaimed Orlega, “Burmo, you and Larin will lead the second wave.”

“Where will you be, General?” asked Burmo.

“I have a queen to kill.” Orlega replied as he swiftly stabbed his talons into the tall red wooden cone.

As the sun is setting down, Orlega marched with a small band of his fiercest warriors to a river known as the Frozen Channel. Canoes floated along the current taking Orlega and his men closer to the city of Mage Hedge.

“Hadlin, keep your ears sharp, signal for any sign of danger,” Orlega said quietly as he turned his face to one of his soldiers that’s on a canoe floating right next to his.

The general’s selected small band of fighters consists of elves with exceptionally powerful gifts. Hadlin, a tall, broad shouldered young man that can hear the slightest sound within radius of kilometers. Marmith, a beautiful girl in her mid twentieth that wields the power of fog and wind. Gorel, a wise looking old man carrying a red wooden staff with the ability to project illusions from hundreds of meters away. Parin, a yellow-haired knight with extraordinary reflexes, and Prosco, a broad sword wielding crown guard that can heal from any non-lethal wound in a matter of seconds.

Hadlin said as he points directly into the city far ahead, “General, I can hear non-human noise from about 2 kilometers from here.”

Fogs emerged out of thin air all around the tiny but fearsome pack of  Tundra Elves as Marmith swings her sword in a spiral pattern directly above her head.

As they are approaching the secret entrance to the city of Mage Hedge, the roar of monsters amplified by the seconds.

Gorel chanted, “Reposa Salutamus Crownusur”.  In the war council of the Mage Hedge’s high commands that’s placed at the top of the Crowned Tower, a 100 meter high building that occupy the dead center of the city, a red crown appeared on the Guardian’s very own table. About a minute later, a flaming red arrow was shot from within the city far into the jungle.

“Marmith, are you able to hold the fog for another five minutes?” Orlega whispered to the exhausted wind wielder.

“You have three, sir,” replied Marmith as she’s struggling to talk and breath at the same time.

Five minutes passed by and the entrance is still couldn’t be found.

“Orlega, it’s time,” Gorel said as he looks straight into the eyes of his general.

“Grandpa?” Orlega whispered unsurely to the wise, old man as he has only done this once before.

Gorel nodded slowly reassuring his uncertain grandson. One by one, Orlega put his claw-like talons into each of his fingers. He slowly raised his right hand and placed it right behind Goren’s neck.

Goren shuts both of his eyes, “Do it.”

Both Goren’s and Orlega’s eyes glowed yellow as the talons dug deeply into the old man’s neck.

Memories from thousands of years ago flashed across Talon’s eyes. He could feel the pride of his grandfather as he slayed the dragon and saved an entire city. He dug deeper into Goren’s buried memories. Orlega relived the experience of a young, mischievous elf accidentally injuring his own instructor during training. He dug much deeper. He could feel his grandfather’s guilt after he realized that he was tricked into attacking Mage Hedge.

“Goren, we can’t attack head on. Nor climb up those walls.” said a deep voice.

“I know a secret path, Goras, tell the men to take out their armor.” replied Goren as he drew his staff.

Gorel chanted, “Reposa Salutamus Crownusur”. A red flaming arrow was shot across the sky into the horizon.

Goren picked up his pace to the men waiting at the river bank.

“Alright men, equip your sword, follow my light and don’t get lost”

The young leader jumped into the river and everyone else went right after him.

Orlega opened his eyes and removed his talons from Goren’s neck,  “I know where the entrance is.”

As soon as Orlega and his men jumped into the river, the light illuminated by the moon is completely blocked by the dark murky water.

“Why defend them?” said a voice familiar to Prosco, “we could’ve lived together, happily ever after.”

At this point, the crown guard was sure that it was none other than his own wife.

“You chose them over me,” the voice continue.

Prosco wondered about what had happened. Did he do what was necessary or her death was his fault? Would the resistance has won and his wife would have lived if he joined them?

“Open your mouth and speak to me my love,” his wife said seductively.

“Prosco, I know what you’re hearing,” he could hear a different voice inside his head, “it’s not her.”

“I killed her, I killed my own wife.” Prosco thought as he was losing track of his surrounding.

“You did what was necessary, she was trying to kill the very people you oathed to protect.” Orlega continued, “don’t lose to the darkness that this river brings, follow my light.”

Prosco jerked back to reality, he fought to keep his mouth shut while looking closely for the light that will guide him out of this dreadful place.

“Only six?” one of the council members exclaimed as Orlega and his men emerged out of the dungeon.

“I hope you’ve got a plan,” The Guardian’s eyes glowed silver for a brief moment as he made eye contact with Gorel, “old friend.”

As he is making his way to the war council, Orlega thought about what’s just happened. The Guardian’s eyes glowed when he said “old friend” as he looked at his grandfather, Orlega pushed the thought away as he was approaching the men himself.

Orlega and Goren placed themselves in chairs facing a round giant table with maps and pawns with the Guardian.

“I’m afraid we don’t stand a chance even with your support,” The Guardian said hopelessly as he placed his hands slowly onto the table.

“My friend, with the support of your mages, we can set up a trap and ambush the queen. We know why she’s here.” Goren replied.

“And what might that be?” the old man inquired.

Orlega points to the relic room on the map, “She’s here for the relic, we’ll ambush her there.”

The Guardian raised his eyebrows “If you’re correct, what makes you think she’ll come to get it herself?”

Goren replied, “Only the one that can wield its powers can move the relic, it would be none other than her.”

“And, how exactly did you know all of this?” The Guardian said as he poured himself a cup of tea.

“The Royal Bible, the relic, was created and used by the god to revive Jesus,” Orlega replied.

The Guardian was once known as Goras, The Silver Sorcerer. But after he mistakenly led the invasion on Mage Hedge with Goren, his source of power was taken by The Guardian then during the battle. He became weaker and weaker as time passed by and now, he’s nothing more than an old, wise, Guardian.

Goren headed to the relic room from the dungeon after all the citizens were safely evacuated. Being in the presence of the relic, each and everyone of Orlega’s men can feel their abilities strengthened.

The relic room was built thousands of years ago from a type of rock stronger than diamond. It’s located right above the dungeon, the reason why, no one actually knows.

“Men, are you all in position?” Goren said as he placed himself in his position behind the table holding the relic.

“Orlega’s not here yet,” Parin replied.

A wall guard ran in exhausted then got down to his knees,

Right after, one of the council members walked right in,

“And so is our Guardian and the General.”

Find out what happened to them in the next volume on Kindle Store for just $99.99 (JK)